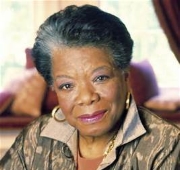 Maya Angelou (Marguerite Ann Johnson) was born in St. Louis, Missouri on April 4, 1928. She was a novelist, actress, professor, singer, dancer, and activist, passed away Wednesday, May 28, 2014 at the age of 86 in Winston-Salem North Carolina. In 2010, President Barack Obama awarded her the Medal of Freedom, the country’s highest civilian honor. One of her many famous quotes is “I’ve learned that people will forget what you said, people will forget what you did, but people will never forget how you made them feel.”